At the end of May, Mary Meeker’s long-awaited annual Internet trends report was published. It is widely considered the foremost publication of technology trends and informs businesses, analysts, and reporters alike. Today, we’re going to go over the trends that matter most to eCommerce and what you can do to get ahead of the game.

eCommerce is growing rapidly, and so is the competition. Current eCommerce statistics state that 40% of worldwide internet users have bought products or goods online via desktop, mobile, tablet or other online devices. 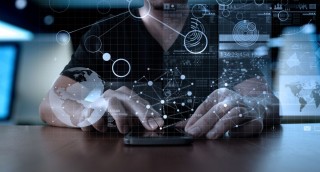 If you want to stay ahead of your competitors, you need to get ahead of the latest eCommerce and Internet trends and stats for the best possible results. Whether your business is big or small, success is found by preparing a strong strategy, testing to find what works best, and knowing where to invest your time and efforts.

Mary Meeker’s report provides a window into what we can expect in the near future.

It’s all about Generation Z 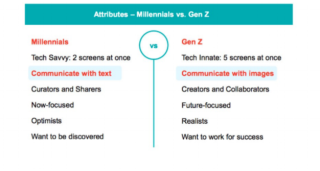 Millennials (born after 1980) are no longer the center of attention as generation Z (born after 1995) is emerging. Members of the Gen Z are expected to become the dominant business influencers of tomorrow.

Gen Z are multi-taskers and multi-screeners who have different media habits. They live in a world of continuous updates and process information faster than other generations, thanks to apps like Snapchat or Instagram. They were born into a world overrun with technology, which had a significant impact on their expectations. They expect constant progress and can’t live without their devices.

With an average of 5 screens at once versus 2 for older generations, Gen Z is a media generation, more creative and image-focused than Millennials.

We may experience a massive shift in advertising methods with this younger generation. With a much higher adoption into apps and various screens, Generation Z’s attention is split and eCommerce marketers may need to expand their advertising reach to ensure they’re being noticed in the right places. It’s necessary for eCommerce companies to adapt to this new audience’s expectations if they want their success to last.

Messaging apps are making an impact

Want to know where services like WhatsApp or Snapchat are heading? Messaging platforms all offer integrated functionalities including eCommerce, texts, calls, stickers, and have become a one-stop shop for their users. By offering a wide breadth of integrated services, these apps are exploding in popularity and aren’t slowing down.

Viber announced their transition from being only a message app to becoming an integrated platform with new eCommerce features back in February. The app will be presenting users with items for sale based on their conversations within the chat app, a novel way of monetising their audience.

Other companies are paying attention. Facebook’s decision to redirect users onto a different app, Messenger, to chat with friends proves that social leaders are following the trend to stay in the competition, with rivals like WeChat already finding major success in China, despite only being half of Facebook’s size.

Given that chat apps are an increasingly important point of engagement for brands and businesses, more messaging apps could follow the trend and start selling directly on their platforms.

eCommerce companies should begin considering content distribution via messaging apps for more personalised, relevant marketing. They should also get ahead of the curve and take the opportunity to sell their products through these messaging apps if they’re able to, in order to broaden their reach to a younger, global audience.

Voice is changing the way we search 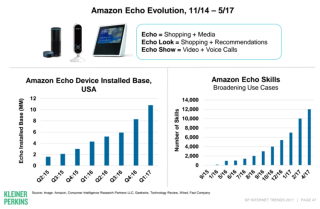 Meeker’s report highlights the growth of virtual voice assistants, first popularised by Siri, but taken further by Amazon’s Echo, and Google Home. The devices offer a new type of personalised content and news every time we search.

Previously, voice and videos searches were considered extraneous, fun tools. But now, they have become effective techniques that can boost your sales up to a great extent.

Voice will soon replace typing, and Amazon Echo’s evolution within the last year demonstrates how quickly voice search is rising.

This only proves one thing: the way we search is changing radically, and it’s time to start thinking about what the rise of voice search means for your business. To maximise their benefits, websites need to have attractive content so that they may appear in search engine results when shoppers are browsing online.

To create voice search-friendly web content, it’s important to focus on long-tail keywords or even entire sentences as voice searches make use of natural language. Optimising your website for local SEO is also necessary as most voice searches are localised.

Think about phrases such as:

They’re all highly localized and the best eCommerce companies will have already optimized for these long-tail searches.

Don’t forget to update your website regularly - opening hours, precise location, detailed content as it is more likely to be researched: “best flat white”, “best cappuccino”... Businesses that introduce voice search-friendly content stand a good chance of racing ahead of the competition.

Social selling and marketing are growing too 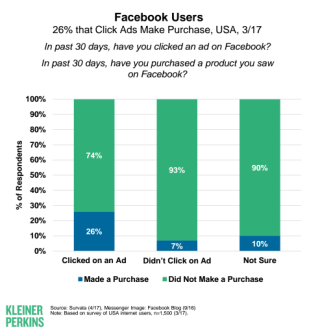 Social selling is trending, and it’s likely to continue past 2017. Social selling is not social marketing. It’s an upgrade to your existing sales approach that reaches and engages with online customers on social platforms. Social selling is the new way to make sure potential customers keep your brand front of mind whilst building personal relationships and receiving insights during the buying journey.

Most of the big online store owners have started using social platforms to promote themselves - through social selling and social marketing - generating traffic to increase revenue and sales on their website.

While Google dominates the digital ad spend and is growing by 20% YoY, Facebook is growing faster, showcasing a 62% growth YoY, proving that Google isn’t the only major player when it comes to digital ad spend. It looks like the social platform might offer a more attractive ROI. In 2017, 26% of those who clicked a Facebook ad made a purchase.

Social media is emerging as an eCommerce channel. It’s time to invest in social selling or risk falling behind your competitors. Here are a few social selling strategy tips to start with:

Your image is just as important in the digital world as it is in the real world. It’s important for your salespeople to update their bios and look trustworthy and friendly. LinkedIn is a great place to find business connections, but Twitter has a much better search function. You can search anyone you want, follow them, and they don’t have to accept your request as they do on LinkedIn or Facebook. Share your expertise, offer solutions. Follow industry influencers. Set up a Google alert. Use relevant hashtags to get noticed and target your content more appropriately. Share, repost, leave comments, like. Constantly nurture your prospects with great content. 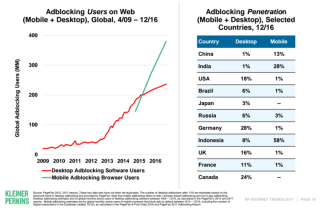 Ad blocking is a global phenomenon that affects eCommerce directly. How can advertising work if no one’s looking at your ads? Meeker’s presentation demonstrates the rise of ad blocking users on both mobile and desktop.

The majority of global ad blockers are found in India, China, Germany, USA, UK and Canada, but adblocking growth continues in developing markets too. Will future, better ads still be suffering from this phenomenon? New data points to video and mobile advertising, which doesn’t suffer as much from ad blocking.

Only half of device users in the US are aware that they can block ads on their mobiles. And with one fifth of smartphone users saying they don’t mind seeing ads on their mobiles, it’s only a matter of time before advertisers migrate their ad spend away from other platforms.

As a result, traditional media needs to double their efforts to keep their revenues growing.

As ad blocking is quickly rising on desktops, it’s time for eCommerce companies to start branching out on different ad platforms. As Mary Meeker’s data points out, adblocking varies wildly between platforms and users on mobile devices don’t use ad blockers nearly as much, compared to desktop users. Migrating your ad spend could have a massive impact on your conversion rates.

And speaking of mobile...

Mobile is skyrocketing and user-generated content presents a huge opportunity 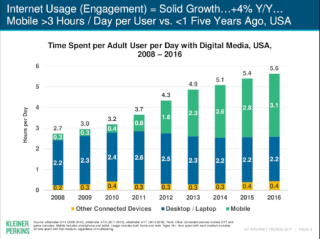 There are now 3.5 billion global Internet users, of which 2.8 billion are mobile users

As mobile Internet usage has crossed desktop searches, it is important for eCommerce companies to ensure that their website is fully responsive so that it can work perfectly on different devices and screen sizes.

However, beyond mere optimisation, eCommerce companies should take the conversation to these social platforms and also speak the same language as their audience. By leveraging user-generated content and using social media platforms to promote and engage with an audience, eCommerce companies can authentically forge relationships with potential customers and reap long-term benefits.

Mary Meeker’s Internet Trends tell us how we can expect users to act in the near-future. By staying on top of these trends, quickly adapting to them, and being flexible enough to change course in the wake of new information, eCommerce companies can win a bigger share of their audience. 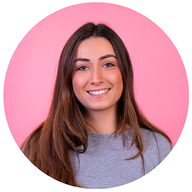 Flora Frichou
Senior Content Strategist
When she's not writing, Flora likes to think of herself as a professional online shopper. She loves a bargain and could spend hours comparing and researching products online. That's one of the reasons why Flora believes in Trustpilot's mission to make the world a better place, one review at a time. If you would like to learn more about Flora, you can find her on LinkedIn, or read more from her on the blog.